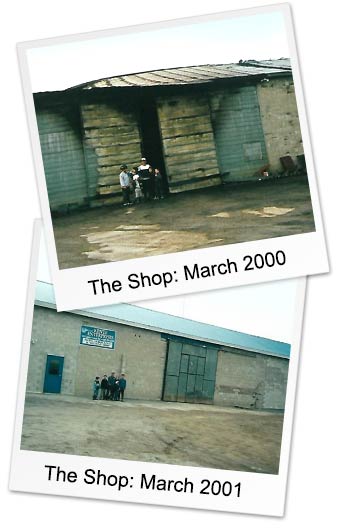 Kente Enterprises opened for business in 1977.

Adrian DeKorte and Frank Westerhof had a vision to start a small machine shop to service local farmers. The small machine shop soon expanded to include welding as well as millwrighting. Frank’s son, John, started working summers and after school for the shop. John developed a passion for developing innovative solutions to problems that his customers came to him with. In 1984, John purchased Adrian’s share of the business and partnered with his father. Kente then expanded to include portable welding and fabrication of custom farm equipment.

Along with the expansion of Kente, John’s family expanded. John’s wife Henrieke purchased Frank’s shares, and Kente became a true family business. John and Henrieke‘s growing children were a constant presence around the shop.

On March 21, 2000, disaster struck, a fire destroyed the entire shop and the equipment inside. A decision needed to be made on whether to rebuild from the ground up, or to move on from the business. John and Henrieke, along with their young family, decided that the fire was not going to hold them back and, with determination and hard work, they were able to continue on with the vision. It took one full year to rebuild, but during that time, Kente Enterprises never stopped working and servicing local customers and businesses.

Since the fire in 2000, Kente Enterprise has expanded and grown in many ways by taking on larger scale structural steel projects. Whether it be a small handrail, to a multi-floor processing plant, Kente Enterprises takes on every project with determination. In 2016, a third generation of family was added to the team as John's son Kurt joined the team. Now in 2018 another son, Aaron, is also part of the business. This new generation adds youthful and enthusiasm and the drive to bring the business to the next level.

Kente Enterprises prides itself on its rural roots and values. Honesty and integrity has been a very important and distinguishing quality since the doors first opened in 1977. Come see John, Henrieke, Kurt and Aaron today to discus your next project!